Measuring The NYC Marathon, Long Before The Starting Gun

Simple technology ensures the accuracy of the world’s most famous race. 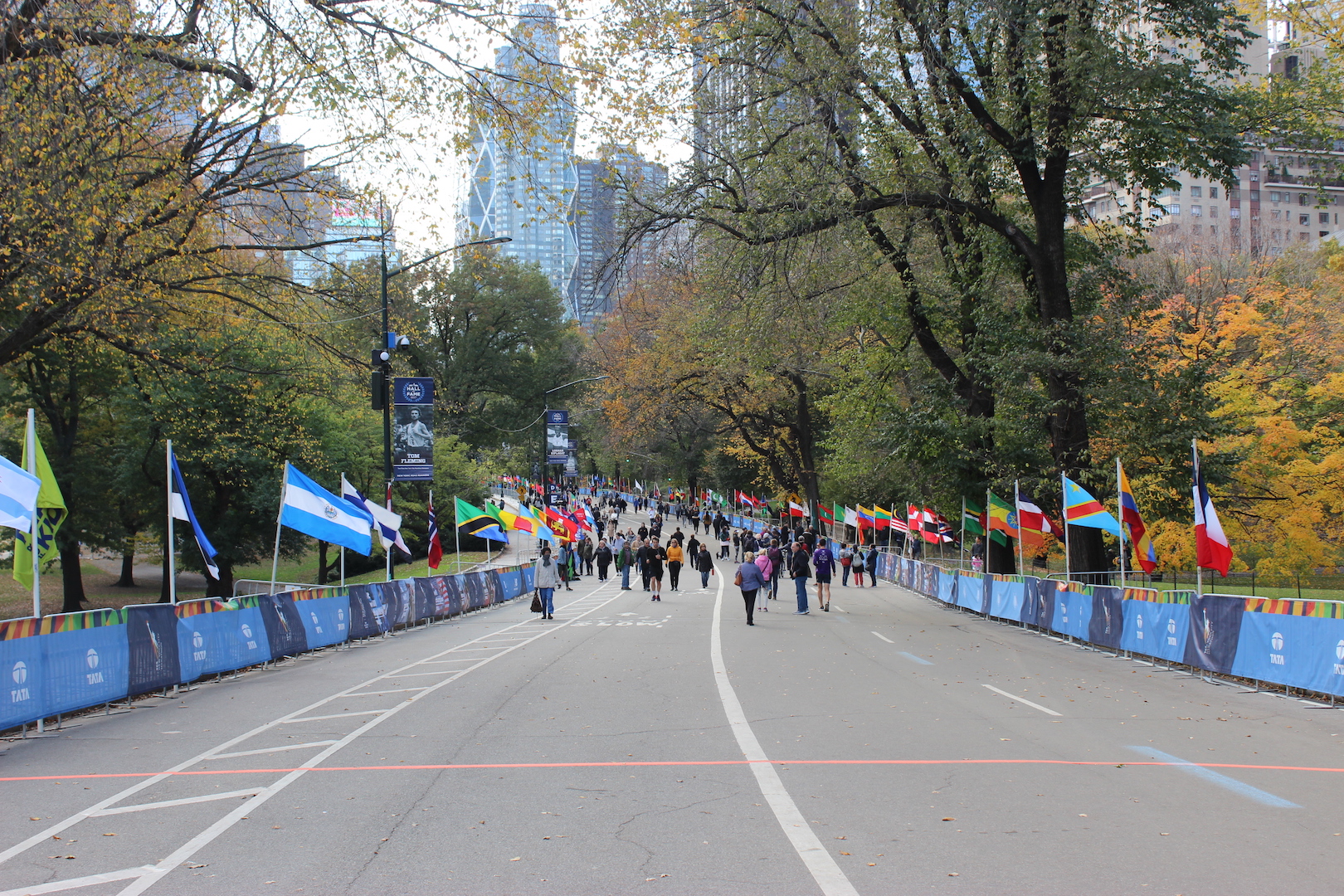 Curious tourists and native New Yorkers alike walk along the final stages of the New York City Marathon route in anticipation for Sunday’s race. The marathon ends in spectacular fashion near the Tavern on the Green, a notable landmark and restaurant in Central Park. Nov. 2, 2019. (Nick Gallagher/NYCity News Service)

For Dan Brannen, it’s always a scramble. This Sunday, as in years before, his team was rushing in the early hours to put up sponsorship signage and barricades along the route of the New York City Marathon, just before over 50,000 eager runners convened at the race’s starting village.

But long before that final push, Brannen is responsible for measuring the course. And without his precise measurement, the race couldn’t go on as an official marathon distance event.

Brannen works as a private consultant hired by New York Road Runners, the group that organizes the marathon. He is also rated as a Grade A Measurer by the International Association of Athletics Foundation, the governing body for marathons and other running events across the globe.

For marathons to be officially recognized by the IAAF, race organizers must measure their course every five years unless a change to the route is made within that time frame. The New York City Marathon also abides by rules laid out by U.S. Track & Field, the governing body for national events, which mandates a remeasurement every 10 years.  The measurement process entails a coordinated effort between police officers, city officials and measurers like Brannen.

Verifying the marathon’s distance wasn’t always so complicated. The course used to consist of several simple laps around Central Park. That changed in 1976, when a group of ambitious organizers set out to celebrate the U.S. bicentennial by creating a new course that sprawled through all five boroughs, according to Liz Robbins, a former New York Times reporter whose book, “A Race Like No Other,” chronicles the 2007 New York City Marathon and the history of the race.

There is no such thing as a self-respecting city, anywhere in the world, that doesn’t have a marathon.

The course’s early designers paved the way for future races such as the Paris Marathon by placing the race in the heart of the city rather than along its outskirts, as was most common up until that point. This ensured that all five boroughs were represented along the length of the course.

“The basic concept was, you know, bring the race to the people. Don’t bring the people to the race,” Robbins said.

Although the design ensured that the entire city could participate in the spectacle, the sprawling course did not lend itself to being easily measured.

David Katz, a native New Yorker who was mentored by the renowned long-distance runner Ted Corbitt, is something of a legend among course measurers. Now a chairman of the Road Running Technical Council, an organization that certifies road races throughout the country, his precision has led to appointments as the official measurer at the last two Olympic games as well as the upcoming 2020 Tokyo Olympics.

Katz said the technology behind course measurement is relatively uncomplicated, yet remarkably effective.

“The method that we use today has basically been unchanged in over 40 years,” said Katz.

To calculate the race’s distance, a bicycle is outfitted with a small device known as a Jones Counter that tracks the number of rotations of the front wheel over the distance of the course.

Then, measurers calibrate the counter by tracking its rotations along a flat strip of steel tape stretched along the street—in this case, a 400-meter section of road located to the east of Central Park near 90th Street.

Next, a measurer rides a bicycle through the marathon route, always taking the shortest possible path to the finish line to match how a runner might travel through the course.

Since the route meanders through 26.2 miles of bustling streets, the measurers typically split the track into several segments. It can sometimes take three or four days to complete the entire course.

“It’s by far the most challenging course that I’ve ever had to measure,” Brannen said.

Brannen worked with Jane Parks, another Grade A Measurer, to calculate the last full-length measurement in 2015, but a small section of the course was remeasured in 2017 when toll booths at the entrance of the Verrazzano-Narrows Bridge were switched out for an electric tolling system.

Measurers start from the finish line and work backwards, since the end point, located near Tavern on the Green in Central Park, is always stationary. Meanwhile, the starting point, near the Verrazzano-Narrows Bridge, can be slightly adjusted in order for the length to precisely match requirements. Even if there are no visible changes to the course, the IAAF still requires a remeasurement every five years to account for small changes that might otherwise go undetected.

Since 1976, the course’s basic structure has remained mostly the same, although organizers have made small tweaks over the years. Those include expanding the amount of time that runners spend in the Bronx and, more recently, altering the route’s path to remove a significant incline toward the end of the race.

Runners sometimes wonder why measurers choose not to rely on GPS, but Katz said that buildings and other barriers can interfere with the technology and make it unreliable. For now, the Jones Counter is the most practical and accurate tool available, according to Katz, but he is currently testing an electronic Jones Counter that shows promise as well.

After over four decades of practice, marathon organizers are getting better at working with city officials to ensure that the race runs smoothly. George Hirsch, the chairman of the New York Road Runners Board of Directors and a runner and organizer in the first five-borough race in 1976, said that before the New York City Marathon, it seemed nearly impossible to imagine an entire marathon running through the center of a big city.

“Shut down the city of New York to run a foot race?” said Hirsch. “That’s what got people so excited and why people wanted to run it that [first] year.”

According to Hirsch, it was the city’s boldness to take on such an immense project that inspired other cities to make similar leaps.

“Now, there is no such thing as a self-respecting city, you know, anywhere in the world, that doesn’t have a marathon,” Hirsch said.