Since 2012, Goodwill has collected 1 million pounds of discarded clothing from the city’s big races. 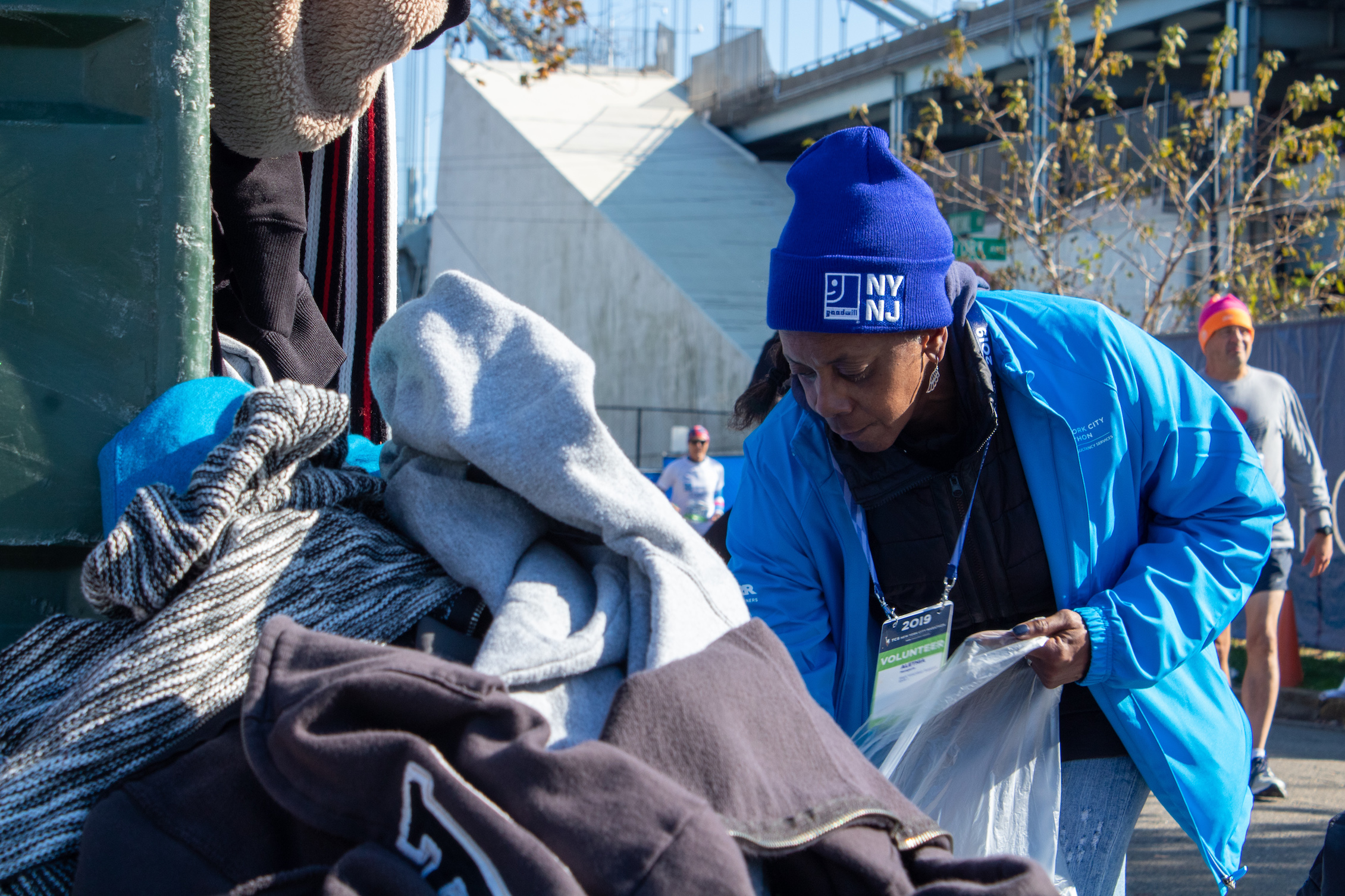 Goodwill volunteers like Alethia Mongerie, above, arrived at the marathon start area in Fort Wadsworth at 4-5 a.m. to set up for the massive collection drive. (Bryce Buyakie/NYCity News Service)

Once a year, thousands of women and men crowd into the tent-filled makeshift waiting area to eat bagels, drink Dunkin’ Donuts coffee and do their pre-race rituals. To stay warm in the brisk Staten Island morning air, most of them are layered in mismatched and ill-fitting clothes, while others are wrapped in blankets worn like a hero’s cape to preserve their heat. These are New York City Marathon runners waiting for the race to start.

As they approach the starting line, runners like Tammy Zavatoski-Grossberndt will shed old, used or newly bought hoodies, jackets, sweaters, fleeces and sweatpants to reveal fitted running outfits. Most of this cast-off clothing is tossed into one of 320 blue bins labeled “Goodwill.” Some items, like mittens and knit hats, will be thrown aside mid-race. 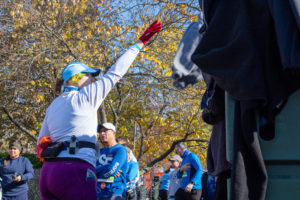 There to gather the discarded clothes are over 200 volunteers from Goodwill Industries of Greater New York and Northern New Jersey. The volunteers will be stationed at the start area and along the 26.2-mile long marathon route, said Jose Medellin, the director of communications at Goodwill.

Goodwill expects to collect nearly 200,000 pounds of discarded fleeces, hoodies, sweaters, mittens, jackets, hats and other textiles at this year’s marathon, Medellin said. If they do, they will have collected a total of 1 million pounds of clothes from the NYC Marathon, the NYC Half Marathon, and the popular Brooklyn Half Marathon since they began collections in 2012.

“It’s a win-win. The usable clothing does not get trashed at the landfills,” he said. Proceeds “fund the programs for individuals with disabilities and other barriers to employment.” 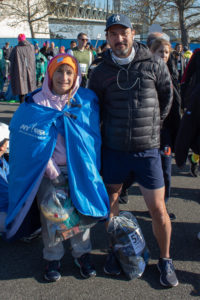 Tammy Zavatoski-Grossberndt and Nico Goebbels set up shop with their bundles of clothes and food outside of the start area. The coworkers from New Jersey train together when time allows, often with Goebbels’ German Shepherd. (Bryce Buyakie/NYCity News Service)

In 2012 Goodwill Industries of Greater New York and Northern New Jersey agreed to a seven-year partnership with the New York Department of Sanitation and the New York Road Runners, the marathon organizers, to collect discarded clothing after the city’s big races.

The clothing will be sold in New Jersey, upstate New York and at the 34 Goodwill stores in the metro NYC area, Medellin said. Money earned from the donated clothes goes toward hospitals, local nonprofits and Goodwill’s services for individuals with disabilities.

For marathoners, race day starts well before the starting shot is fired. But Zavatoski-Grossberndt’s day starts hours before dawn in Flanders, New Jersey. From there, she drives to the designated stop for the 5:30 a.m. bus that takes runners to the start area. Once she arrives at the start village, Zavatoski-Grossberndt patiently waits those excruciating few hours before her 10:30 a.m. start time.

To stay warm in those early hours, the under 5-foot Zavatoski-Grossberndt, 55, wears clothes that her children outgrew years ago but still fit her. This year, she said she has two outfits in mind. For donation: sweatpants, worn sneakers and socks, and maybe a bathrobe. For the race: newer running shoes, clean socks and a fitted running outfit.  The change of shoes and socks eliminates any blister-causing moisture buildup while waiting.

“You don’t want to be cold because you don’t want to lose energy,” said Zavatoski-Grossberndt, a veteran of five marathons and two ironman races. “So, the whole looking-cool thing doesn’t happen in the beginning.” 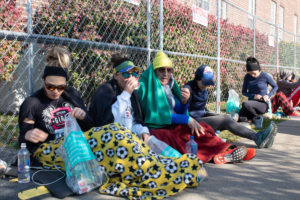 Runners try to stay warm while waiting for the race to start by covering up in blankets and extra layers of clothing.  (Bryce Buyakie/NYCity News Service)

While some choose their extra layers simply to stay warm, others like Sandra Taverna-Trani, 42, plan to donate something special to Goodwill.

For her first full marathon, Taverna-Trani plans to wear and donate an 11-year-old fleece hoodie that holds high sentimental value for her, having given her comfort during her two pregnancies, she said.

Taverna-Trani decided to enter the marathon in late 2018 to raise $3,000 for the Arms Wide Open Childhood Cancer Foundation soon after her friend’s 6-year-old daughter Sally died of cancer, she said. She wants to mark this time leading up to the marathon by donating something special.

“I’m really glad that someone else will find comfort in it,” Taverna-Trani said. “The journey to this marathon has been emotionally, physically and mentally tremendous.”

Pounds of Clothing Collected Since 2012

← Measuring The NYC Marathon, Long Before The Starting Gun