Menstruating During a Marathon, a Subject Rarely Talked About

About 3,000 NYC Marathon runners get caught in this cycle. 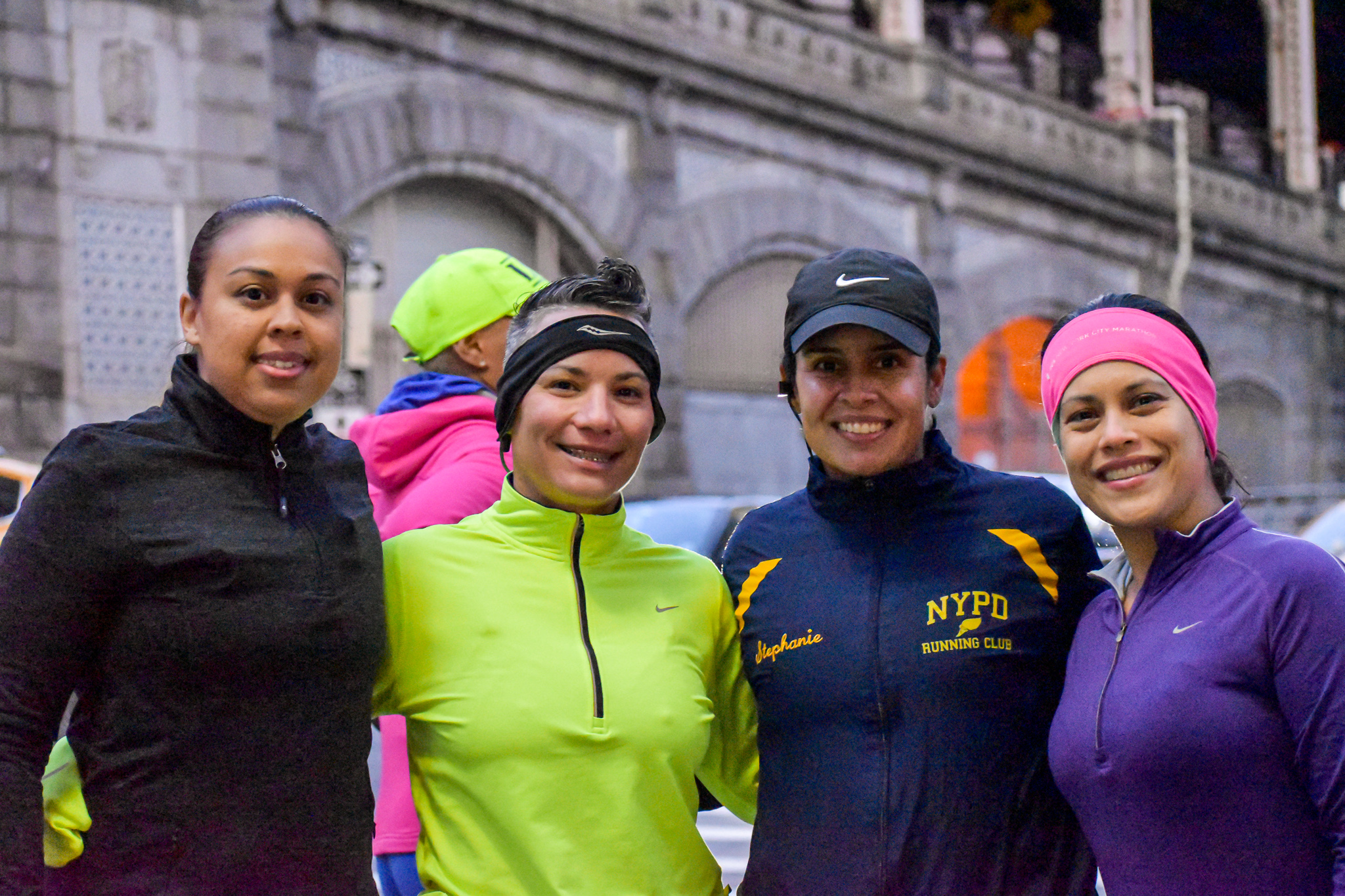 More than 50,000 people ran the New York City Marathon this year. Of those, an estimated 3,000 participants may have been bleeding, and not from their feet.

Menstruators, including women, nonbinary folks, and trans men who have their periods, face a harsh reality when big events roll around: Will “it” be here? The New York City Marathon is no exception. They have trained for this event for months and their comfort ends up at the whim of their cycle. Because of this possibility, people who menstruate have found ways to give all their energy to the race, even if they would rather be at home with a heating pad.

Stephanie Ramoz knows firsthand what this curveball can look like. At her first marathon – she’s now on her eighth – the public defender was met with an unwelcome surprise. “You could do all the training in the world, you could be a top athlete, but you can’t choose that f—— day,” she said. Ramoz once broke her foot during a marathon and ran several more miles on the injury. She said running on her period was worse.

Estimated No. of Menstruating Runners this Year

Having your cycle while running is different for every menstruation — while some have their cycle every month, other very active runners sometimes skip periods for months at a time. The key is knowing your body and how exercise can either help or hinder your menstrual cycle.

Running clubs, primarily women-centered ones, have found comfort in tackling these running conundrums together.

One woman, Solis Belizaire, created Latinas Run in part to address women-specific concerns come marathon day. What started as an offshoot of her larger organization Latinos Run, the group has become a thriving safe space for every question under the sun. Female runners from around the world come together in Latinas Run’s private Facebook group to discuss everything from period products to camaraderie.

In addition to questions surrounding pain during a marathon, runners also discussed tips and tricks for running 26.2 miles while bleeding. They feel more comfortable, Belizaire said, voicing concerns about their menstrual cycle in this closed, nonjudgmental forum. “You can’t really talk about [periods] on the mixed page because men don’t wanna talk about that,” she said. 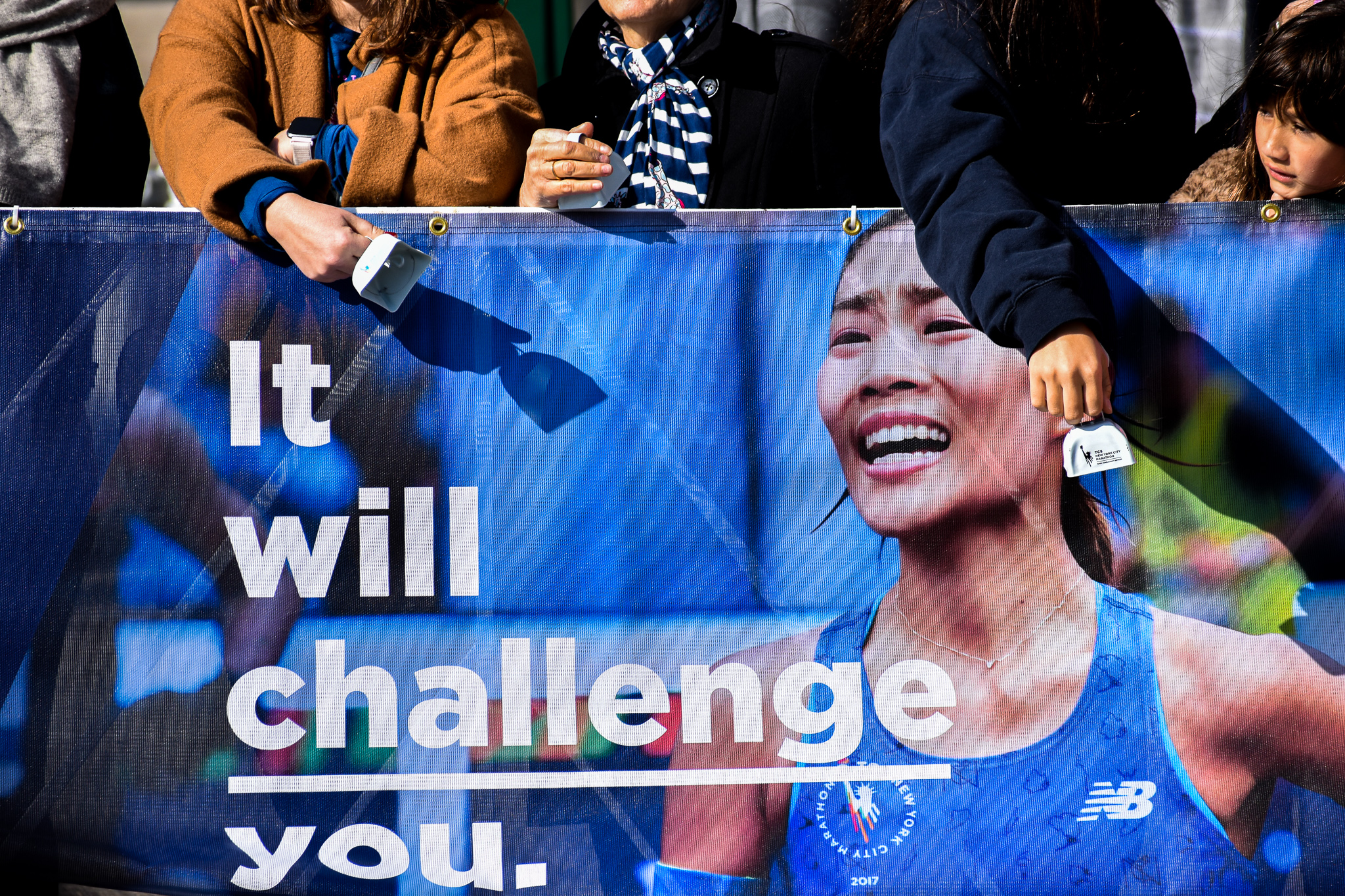 NYC Marathon “It Will Challenge You” ad along the route. (Kathryn Herchenroeder/NYCity News Service)

To prepare for marathon day, these runners test various products to see what works for their individual needs. Participants have utilized everything from tampons to pads and menstrual cups. In fact, 261 Fearless, a global women’s running group, and Hello Cup, a menstruation product provider, teamed up to produce a marathon menstrual cup that debuted at the New York City Marathon Expo last year

At the New York City Marathon, medical tents line the sides of the streets, offering refuge to runners with health issues or general discomfort. Volunteers and medical officials provide Vaseline, bandages, ice, some medicine, and period products. At such a large race as this one,

organizers can plan to have a wide selection — tampons, pads, cleaning products — to hand out. Yet, at smaller races around the country and world, menstruators’ needs are often aren’t addressed.

Even though the New York City Marathon tents offer products throughout the course, period bleeding is unpredictable. Runners with their cycles never quite know when they will need to find a bathroom to switch out products. This uncertainty leads people to find creative ways to carry wipes, pads, tampons, iron supplements and whatever else they may need.

NYC marathon runners are not allowed to have a running backpack, which leaves menstruators searching for every nook and cranny to place these products. Runner Analin Nunez recalled, “I’ve been on the road and seen a tampon fall on the floor and I’ll be like ‘I hope that wasn’t the only one she was carrying on her,’” she said.

With this being her second marathon ever and first New York City marathon, Nunez planned for every possible situation. As it got closer, she realized that her cycle aligned with the early November race. For the past few months, she started trying out different period products while running, preparing for the worst and hoping for the best. Eventually, she decided on a specific size of pad that works for her and she had an approved runner’s accessory to hold them.

On the morning of the race, Nunez was feeling excited for the day and ready for the 26 miles ahead of her. She was nearing the end of her cycle, and had prepared well with products in hand. Nothing was going to stop her from completing her second marathon of several to come. “I’m full of energy,” she said. Nunez’ success, along with her fellow menstruators, is often the result of robust planning, intentional purchasing, and a go-with-the-flow-persistence.

As runs approach, big and small, Stephanie Ramoz has started to see cycle uncertainty as a battle to be won. For those who go into the marathon with their cycle, she said, “you’re prepared for war.”