This runner will make you rethink what it means to compete.

For some runners, it’s not about winning the race. It’s about finishing.  (Animation by Natalia Rodríguez Medina/NYCity News Service)

Last year, David Brinker, director of content at Snap Inc., completed the New York City Marathon 11 hours, 44 minutes, and 10 seconds after beginning the race. He was the last person to cross the finish line.

“Yes, I was the person who finished the New York Marathon last, in 2018,” Brinker said, hardly able to control the excitement in his voice. “I was guiding the most incredible athlete I’ve ever met in my life.”

Brinker is an Achilles Guide, which means he volunteers to run alongside runners with disabilities, assisting them with anything they might need to finish the race.

He plays the role of the sidekick. He’s a reminder to drink water and the motivator that assures the athlete they are going to get to the finish line no matter what.

Running this race isn’t about beating a personal record or coming in first place. It’s about proving that no matter how hard things get, crossing the finish line is possible, particularly when there’s someone cheering you on the whole way.

Brinker has run the New York City Marathon 12 times, four of which have been as a guide to the same athlete. He made a vow that he will continue running the marathon until the athlete he guides turn 90 years old—by then, Brinker will be 60. 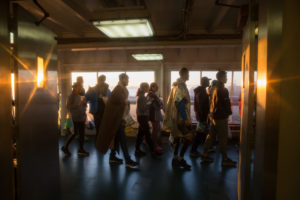 More than 50,000 long-distance runners met at the east end of Staten Island before 8 a.m. on the morning of the marathon where they waited for the guns to sound at the starting line. By 7:25 p.m. the marathon would be officially over.

This is where the race really begins for Brinker and his running mate. The race course closes and the police instruct runners that want to continue to start running on the sidewalks. They have anywhere between 15 and 18 miles to the finish.

“There are people on the street, and they’re cheering for you. At the same time, people are vacuuming up the water stations. It’s like this great contradiction because you’re getting closer and closer and closer but things keep closing,” Brinker said.

According to sports psychologist Dr. William Wiener, this is where the greatest lessons of the race are learned.

“To see a task that is out of reach and work hard enough to do it, sometimes despite disability, is one of the most empowering feelings that people can have. What’s learned in sport is learned in life,” Wiener said.

Brinker said he believes that running is purely a battle against yourself and anyone can do it. But that doesn’t mean that finding the will to push through is easy.

“The second you cross the finish line, your life changes in one indelible, fundamental, and permanent way,” said Brinker. “If you’ve ever had a doubt about the world being a good place, walk the last mile of the New York City Marathon after the race is over. It’s pretty amazing.”