The Sounds Of The Marathon 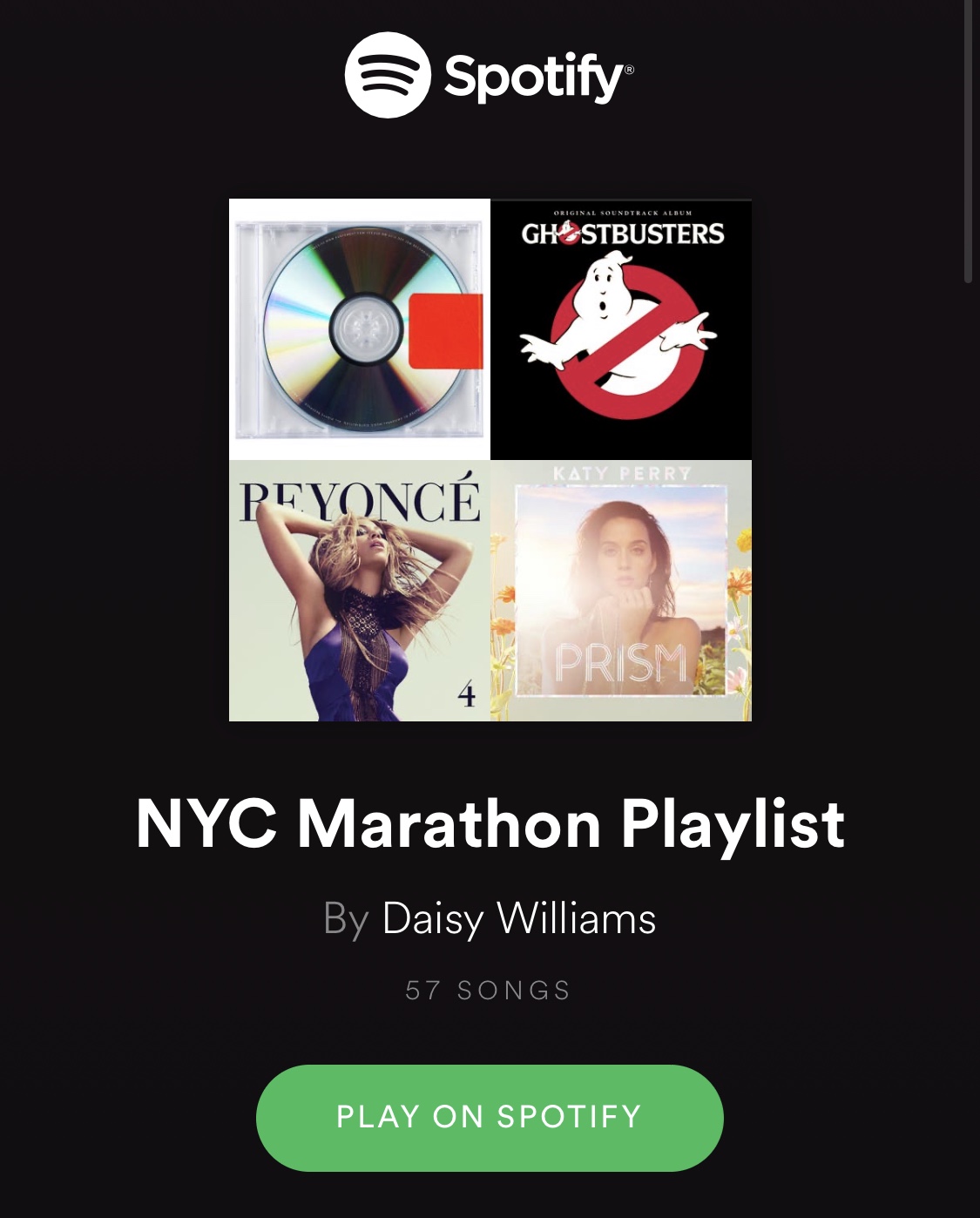 Reporter Daisy Williams created a Spotify playlist using the top songs over 10 marathon runners will be running to at this years race.

This year’s marathon runners have the Eye Of The Tiger and they’re Born To Run. Many of the New York City Marathon’s runners will be running to some beat, whether it be Rock ‘N’ Roll, hip hop, pop, or the sound of feet hitting the pavement and cheers from the crowd. We got into the minds and ears of four runners and heard what songs push them over the finish line.

“How did they account for his rise to the top? The man was non-stop!”

Most dread the final run through Central Park, but Katie Croll loves it. It means it’s time for her carefully curated final six-mile playlist. She says every step has an appropriate song. “They are all upbeat, high energy,” Croll said. “I look forward to hit the 20-mile marker in the Bronx because I know I’ll get a kick out of my favorite songs to run to.”

“Can’t Hold Us” by Macklemore

“Shake It Off” by Taylor Swift

That final stretch is when the heavy hitters come in. Inspirational tunes that all fall into a category she calls, “songs I would choose if this were a movie sequence where they are showing that the person running is determined, focused and relentless.” She is sharing the stage with thousands of others, but she is the star.

The finish line is inching closer. Only Broadway showstoppers can push her. She turns to Hamilton. “The lyrics really resonate when you’re running a marathon,” she said. “Plus, it’s just a great song and if you are in New York City, how can you not play some Hamilton tracks?”

“Joy” by For King and Country

“Soldier On” by Sidewalk Prophets

“This is Who I Am” by Third Day

“Even When You’re Running” by Casting Crowns

“What don’t kill ya, makes ya stronger”

As she’s running through the boroughs, over the five bridges, and powers towards the 67th Street finish line, Joanne Reynolds isn’t alone: She always has the word of God with her. The upstate New York resident exclusively listens to contemporary Christian music.

“I need to be reminded all the time of where my strength comes from and who gives me the privileges and opportunities that I have been blessed with,” said Reynolds.

Reynolds’ faith builds her up more than any classic rock ballad or top 40 dance beat. She says as inspirational as the message is, it doesn’t hurt that the melodies are lively. “Christian contemporary music is all scriptural based, set to some great music and reminds me of the greatness of our God,” she said. “It’s all positive and that’s what you need when running, especially for 26.2 miles.”

“I know every mile will be worth my while”

The regime tailored for Stitelman starts with audiobooks. The stories help her beat a tiresome and tedious task of training. “Audiobooks help the long runs that can be boring and monotonous,” said Stitelman.

“Go the Distance” by Hercules

“All These Things That I’ve Done” by The Killers

“I Want it All” by Queen

She competes to the beat of crowds cheering and gets through the tougher terrain with help from her favorite tunes when she needs the energy burst. “I will probably listen to music in spots when I need motivation and the crowds aren’t big,” she says. “Otherwise, I’ll listen to the crowds.”

“Run the World” by Beyoncé

“Born to Run” by Bruce Springsteen

“Cause I am a champion, and you’re gonna hear me roar”

Julia O’Brien, an Australian now living in New York, is bringing the camaraderie of Aussie mate-ship to the New York City Marathon. She may be running solo, but she includes her friends and family in her race by letting them pick her music as a way to feel connected to them – even if they are the other side of the globe.

“I listen to the playlist for the first time on race day, that way it’s a surprise and everything feels fresh,” said O’Brien.

Although, she says some do show their cheeky Australian humorous side by including more twist and turns in the music selection than the course itself. “Some friends take the piss and pick very long and slow songs,” she siad. “But for the most part, it’s a winning formula.”