For These Queens Runners, The NYC Marathon Is A Team Event 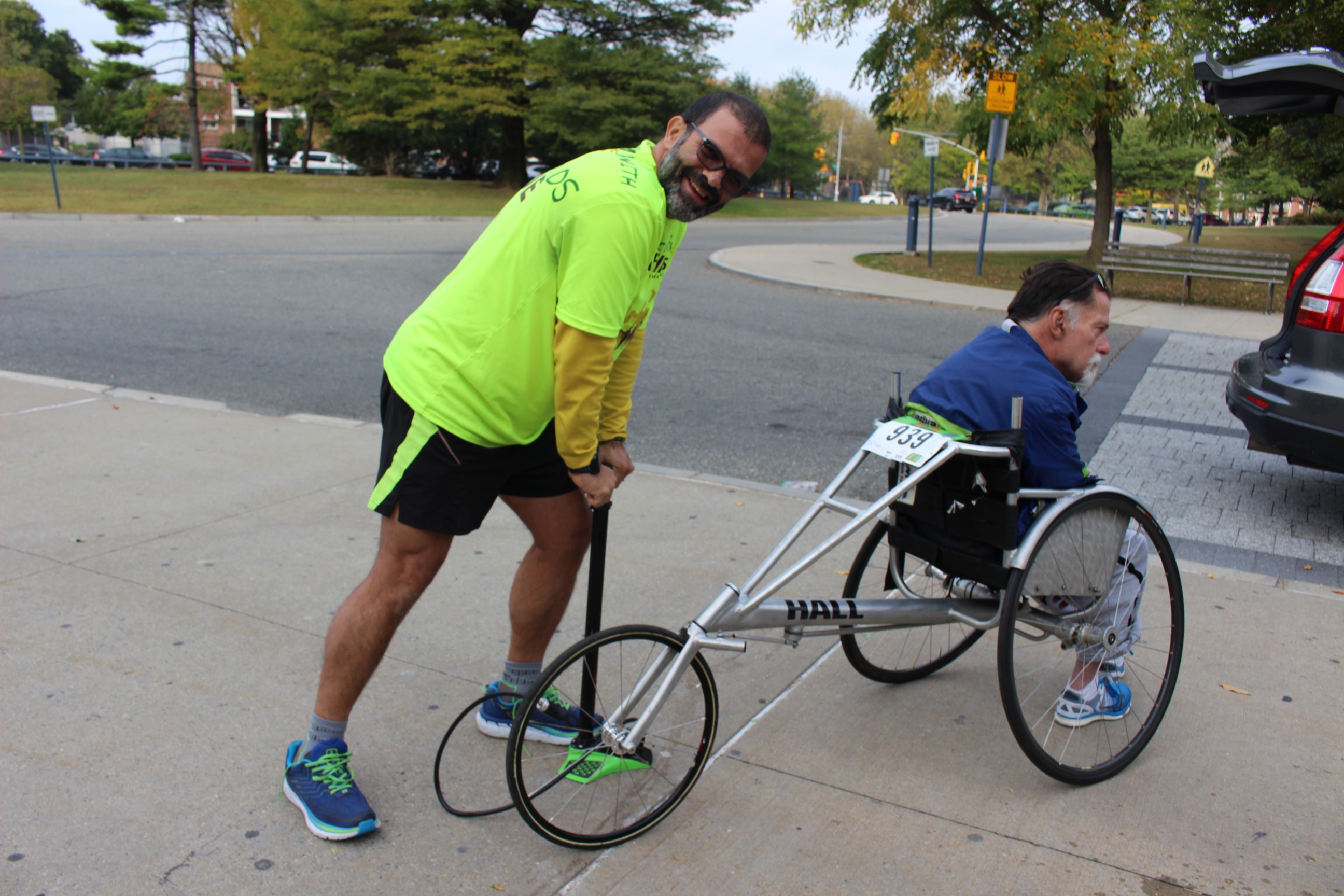 On a brisk Sunday in October, wheels, walking sticks, crutches, canes and sneakers can be heard rhythmically crunching the fallen leaves scattered across the Flushing Meadows Corona Park grounds.

It’s still morning when a dozen runners and their guides convene at the Queens location to clock their final mileage for this year’s New York City Marathon. The training teams are readying for the Nov. 3 race through a local chapter of Achilles International, a nonprofit that empowers people with all types of disabilities — seen and unseen — to participate in mainstream running events.

“I would liken it to any other running club,” said Wendy Phaff, the founder of the Queens chapter of Achilles International. “There are other challenges, our athletes have different goals, but the camaraderie is the same. Even though you’re out there on your own, it is a team sport. Your running club is there for you.”

Among the gathered runners is Glendale resident JP Pierre, donning his signature cape — an accessory that symbolizes his nickname “The Ultimate Running Machine.” The former McDonald’s maintenance and facilities worker has completed 13 marathons since a 1999 mugging resulted in a traumatic brain injury. With the help of guides and a desire to make his now-deceased mother proud, Pierre trains with his fellow runners through the Achilles Queens chapter, which has become like a community.

It’s a community that also includes Bill Reilly, a 67-year-old Fresh Meadows resident with cerebral palsy who goes by the nickname “Backwards.” After losing most use of his limbs, Reilly propels himself backward with his specially designed wheelchair. His guide, Hector Ramirez, not only accompanies Reilly during training but drives him to and from the meet-ups and loads and unloads the runner’s chair into his SUV.

“He’s done over 40 marathons,” says Ramirez, who interprets for Reilly due to some speech difficulties. 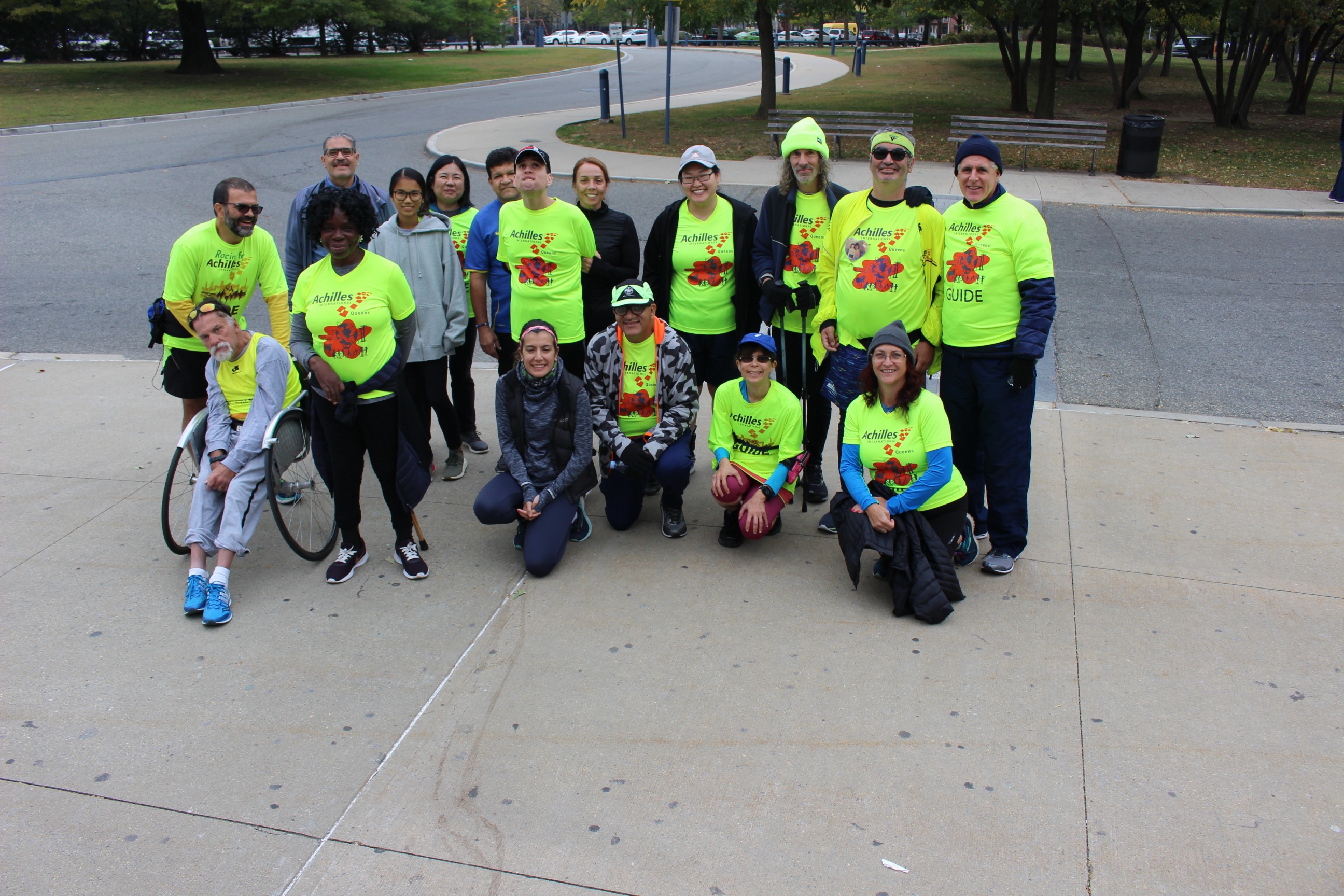 Founded in 1983 by the first known amputee athlete to run a marathon, Dick Traum, Achilles International has grown significantly over the years, with chapters and members residing in more than 65 national and international locations. Phaff, who serves as a development director for Queens Centers for Progress, an organization offering services and support to children and adults with disabilities, started Achilles’ Queens-based chapter in 2016. That was over a decade and a half after the New York City Marathon launched its wheelchair division and more than 40 years after Traum completed his first marathon.

Phaff’s professional work translates to the training group, where she supports the running duos as they work towards several running and athletic goals, many of which have nothing to do with winning. In Phaff’s chapter, the New York City Marathon is as much about building physical strength as it is about building confidence and a sense of accomplishment, in whatever form that comes.

Having differing goals than the marathon’s more competitive athletes doesn’t diminish run-day jitters, though. When asked about how he felt about the upcoming race, marathon veteran Reilly said he was nervous.

“There’s another gentleman who races backwards, too,” Hector says. “He’s a younger gentleman, who saw Bill and got inspired. He got himself a backwards chair, and now they’ve got a competition going on.”

Last year, Reilly was beaten by his competition but hopes that he can emerge victorious after putting in the training. “He feels that a lot of people with his type of disability don’t get out there to exercise,” Ramirez interprets as Reilly explains. “Not everyone is able to do a marathon. Bill feels that if people had the training and support, that more people would get out there and do it.”

Getting out there first requires qualifying for the race. Achilles encourages runners to try to enter the marathon’s drawing system first to help ensure the nonprofit can meet interest demands and get as many runners in the event as possible. Once confirmed for the race, the athletes and their guides train for 16 weeks, typically running four to five times per week during citywide workouts in Central Park, Prospect Park and Flushing Meadows Park.

Achilles guides are experienced runners able to advise on proper pacing, training, stretching and injury prevention. Additional coaching is provided by chapter leaders and volunteers who are certified coaches. For their first few workouts, new Achilles guides work with a veteran who helps teach the basics of how to guide their runner. Runners and guides are ultimately paired up by pace.

“Besides having a passion for running, I also have a passion for helping this population,” Phaff said. “I wanted to blend the two together.”

One runner, Alan Kaufman, came full circle through the Queens-based group. The 61-year-old completed 11 marathons as a participant and then 13 as a guide, after the Achilles Foundation’s signature neon shirts sparked his curiosity. The Forest Hills native says he was both smitten and “completely hooked” by the welcoming running community.

Following a brain cancer diagnosis, Kaufman completed his first marathon in 2018 as an Achilles athlete. “It was life-affirming,” Kaufman said. “I had been given a very dire cancer diagnosis, and traditionally it was a six-month time frame. I went on a new medication, and my doctors said, ‘If you can do it, do it.'”

Kaufman jokes that he has gone from guide to guided. This year, Petrina Schneiderman, 33, will be at his side on race day after coming out for consecutive Sundays to train alongside him. But as someone who has been on both sides, Kaufman knows a thing or two about what makes a useful running partner. 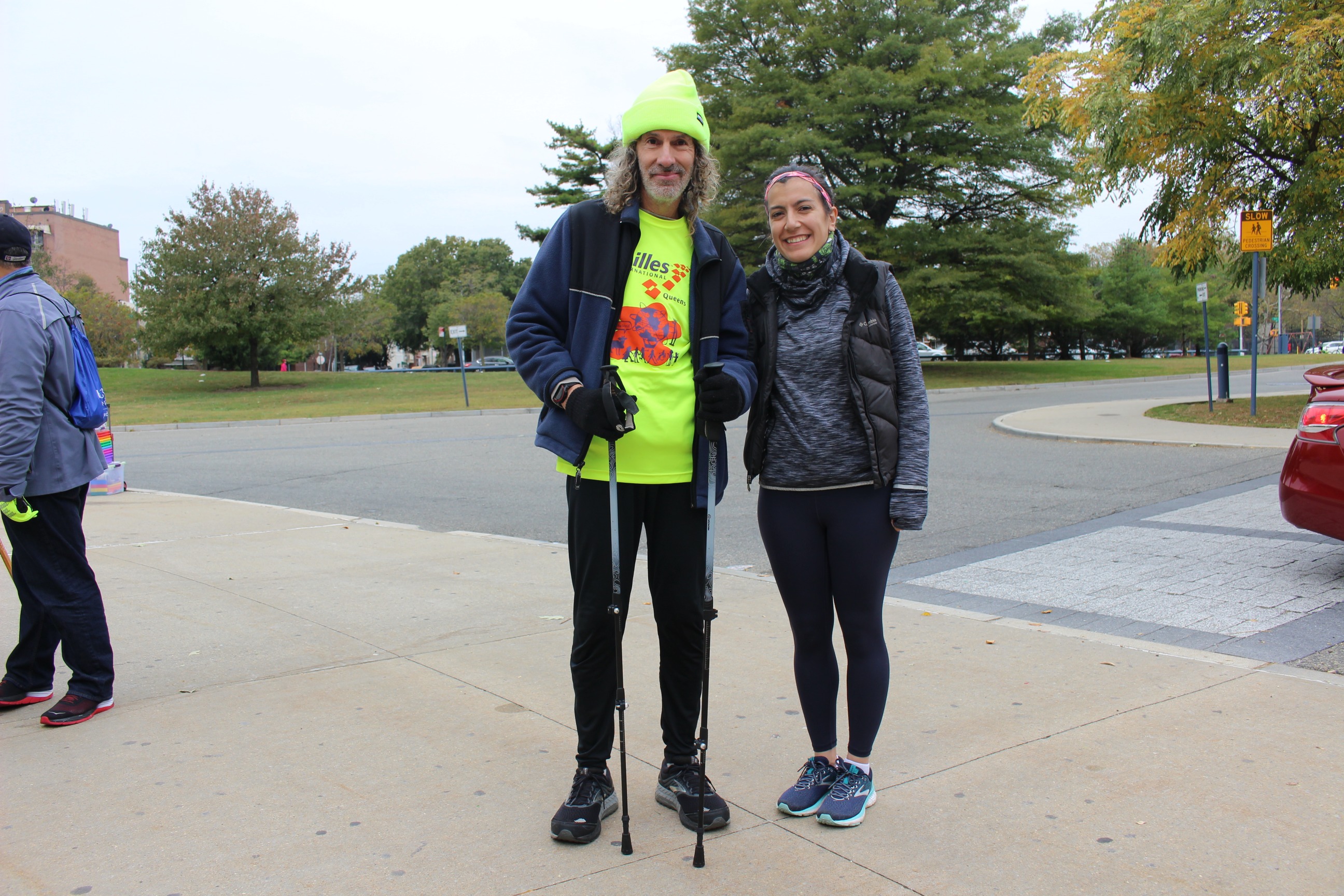 “Know your athlete,” Kaufman says. “I firmly believe as a guide that the first thing you need to ask your athlete, politely and respectfully, is what is your challenge? I always made sure I knew every detail of what I had to look out for: how often you need to stop, how often they need medication, when to boost their morale.”

Ultimately, Achilles athletes and their guides say they are running the marathon to be a part of a movement, and, of course, to chase that runner’s high.

“Once you get started… it’s hard not to want to come out every Sunday,” Schneiderman says.